​St Andrew's is a vibrant parish community in the Anglican tradition which gathers in beauty and in grace in order to celebrate and share God's gifts to all of God's people. With God’s help, we strive to listen, to serve, and to grow.  The Vestry, clergy, and staff of St Andrew’s are committed to ensuring that the parish be a place where everyone can discover and nourish significant relationships with God and one another.

OUR MISSION
The Vestry, clergy, and staff of St Andrew’s are committed to ensuring that the parish be a place where everyone can discover and nourish significant relationships with God and one another.

WHO WE SERVE
We gather for worship together on four occasions each week: Sunday morning Eucharists at 8:30 and 10:30, Wednesday Eucharist at 6pm, and Friday Prayers & Meditation at 5:30. Our outreach extends not only to others and organizations nearby, but also throughout the diocese and around the world.  We actively support the Kent Food Bank, the Connecticut Bishop’s Fund for Children, a school for blind children in Ethiopia, and a grammar school and medical clinic in Haiti.

WHAT WE DO
The women and men serving on our Altar Guild; at our annual Tag Sale and our annual Christmas Bazaar; as lectors, chalicists, hosts at coffee, as workers on our twice-yearly clean-up days, and as helpers at a nearby soup kitchen are enthusiastic, gracious, and welcoming volunteers.

St. Andrew’s Histories
Reprints are available for the two histories of St. Andrew’s:


Copies of each of these histories are available in the narthex or by contacting Heather in the parish office.  We ask that you consider a donation of $8 for each history in order to help to defray the cost of printing. 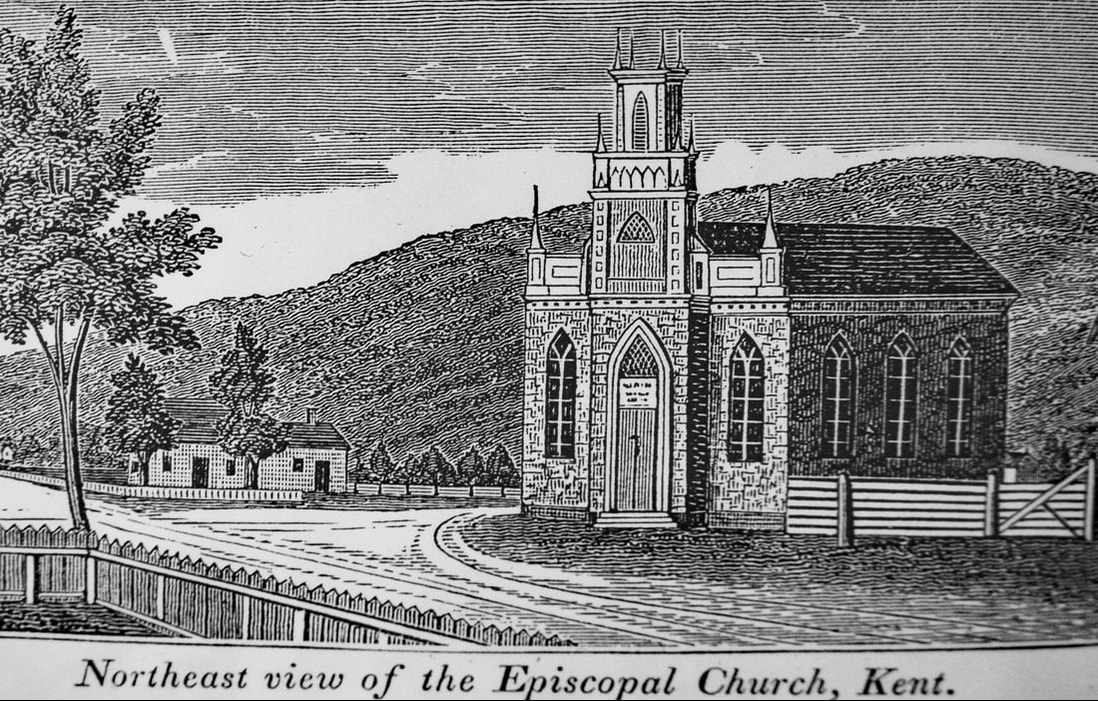 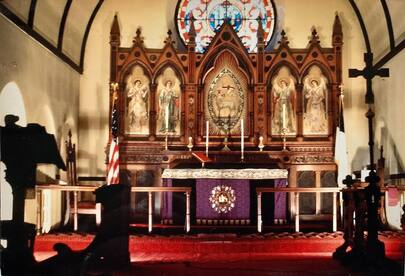 Anglican worship, led by itinerant missionaries of the Society for the Propagation of the Gospel in Foreign Parts, began in Kent in 1763, and a window in the south elevation of the nave commemorates the hospitality of Hannah and Reuben Swift (whose grandson built the current community center, Swift House) to these priests of the Church of England.  The Swifts were probably brave to have accommodated the SPG missionaries, because the Congregationalist establishment in Connecticut had vivid memories of the persecutions that ‘dissenters’ from the Church of England had endured before emigration to the colonies in New England.

St Andrew’s Parish itself was organized in 1806 as St John’s Parish, and the foundations of its first church building are now the foundations of the R.T. Facts shop at 22 South Main Street.   In 1819, the small congregation called the Reverend George B. Andrews to take charge of the parish, the day before the almost equally small congregation in New Preston (Marble Dale) extended a similar call to him.  Mr Andrews had been serving in Sharon since the previous year, and so he now traveled amongst three congregations, some 15 – 30 miles distant from one another.  By 1822, he led two more congregations –in Canaan and Salisbury—as well.  His wife had a considerable fortune, and so with her help he was, beginning in 1822 when he laid cornerstones in New Preston and Salisbury, able to provide new church buildings for his parishioners.  Bishop Thomas Church Brownell, the 3rdBishop of Connecticut, consecrated the new church building in Kent in 1827, the year after its completion; and because of the popularity of Mr Andrews and because of his wife’s generosity, the parish ceased to be that of St John’s and became that of St Andrew’s.

The new St Andrew’s Church was a bit north in what is now Route 7 than was St John’s Church, and the structure at 1 North Main Street (at the corner of Routes 7  and 341) is pretty much that which we know today.  The Reverend Mr Andrews was probably his own architect, and the five buildings that he built –in Kent, Marble Dale, Salisbury, Sharon, and Wappingers Falls (NY)—are obviously similar, characterized by hammer-beam ceilings and distinctive lancet windows.  They are among the earliest examples of the ‘Gothic Revival’ style in theUnited States.

Because the Congregationalist majority in western Connecticut was sufficiently uncomfortable with Anglican worshipping in their midst, St Andrew’s Church was originally sited at the southern outskirts of the town of Kent, intentionally on the fringe of things; and Mr Andrews  perhaps intentionally thought to irritate his Congregationalist neighbors by his use of lancet windows –sharply pointed arches—and erecting what obviously appeared to be a parish church building of the Church of England in territory claimed by the dissenting Congregationalists.  (Within a quarter of a century, however,  the Gothic Revival style had become so popular that, when a new Congregationalist meeting house was built in Kent, it was more ornately ‘gothic’ in exterior appearance than was St Andrew’s Church.)

In the 1870s, the parish added the chancel and sacristy to the west elevation of the original building, removed the galleries that had rimmed all but the west elevation of the nave, and replaced the crennallated top to the bell tower with the distinctive steeple still in place.  In 1883, the current rectory was built in order to accommodate the Reverend Isaac Chauncey Sturges, whose wife, Mary Louisa Fuller Sturges, had just given birth to their first child.  Mary Louisa was the daughter of a former warden of the parish, and she and her husband had been living with her widowed mother:  the building of the rectory had to do with the decision of the parish to allow their second full-time rector and his family to have a house of their own, presumably much to the relief of the Fullers.

In the 1950s, Bishop Walter Henry Gray had begun to urge all parishes in the Diocese of Connecticut to build parish houses; and in 1961, when David McAlpin Pyle was the rector, St Andrew’s moved its church school and social functions out of the undercroft of the church building, where they had been housed since the undercroft had been dug in the 1930s, and into the parish house that serves the congregation to this day.  In 2005/6, with the former Warden Wes Wyrick as the architect, the parish house was renovated and expanded to include modern offices and a choir room.  In 2011, Wes Wyrick also designed and supervised the construction of a handsome memorial garden, between the church building and the parish house, for the interment of ashes.  Burial in the memorial garden, St Andrew’s Close, is available to the members of the parish and to its friends.

After the arrival of the railroad in the mid-19th century, the town of Kent shifted south of its original location in what is now the Flanders section, and St Andrew’s Church was no longer on the edge of the settlement but rather in the heart of the commercial district. The parish has long been actively in the life of the town, and its members are well represented on the various committees of local government. 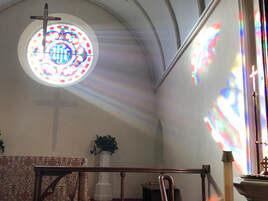